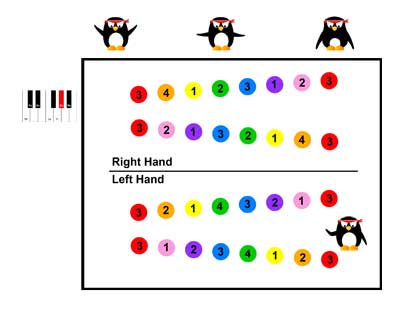 This printable in only available to our members right now.

How the Printables Work

These printables are a little different than other scale charts on the web.  They were designed for use with the movable-do piano insert, currently available here for free.  The little piano(s) on the left show the Do-Re-Mi locations for each scale, and especially where to line the "Do" on your insert up on your keyboard.  The fingering is then color-coded on the printable to match the colors on the insert behind each key.  Pretty nifty, right?  No music reading skills required, no guess work remembering which note comes next, just the basics of color matching and knowing your finger numbers.

Understanding the "Why" behind fingerings

Why indeed?  Why not always use 123,1234,123,12345, or 123,123,12... or even 12,12,12,12?  The biggest deciding factor behind the given fingerings is that the thumb, for some reason, has an aversion to black notes.  Oh, he'll play them in octaves if the pinky is there to back him up, and sometimes in special circumstances if he doesn't have a choice, but you see, he'd really rather not play those black notes at all if he can help it.  It's just not ergonomic and he knows that the path of least resistance is sometimes the best path for greater efficiency.  The thumb is the strong man player, and the smaller fingers are better at all those quick little away-missions on the black keys.

With an understanding that the thumb is scared of black notes, all of the scale fingerings will make more sense.  They are built around letting the thumb stay on the white notes.

A Closer Look at the Printables

A-flat major scale.  Ditto.  It may seem strange to start out with "34" in the left hand, but when you look at the big picture, I think we can agree that it's for the best.

D-flat Major.  Or is that C# major?  They're one and the same, enharmonically.  That means that they sound the same, but would be spelled differently.  D-flat major is Db, Eb, F, Gb, Ab, Bb, C, Db.  5 flats.  C# major on the other hand, with it's 7 sharps is a bugger.  C#, D#, E#, F#, G#, A#, B# C#.  Yikes!  Luckily, we really don't have to thank about it that way at all in order to play it on the keyboard.  In fact, many people find that these last 3 scales are the EASIEST to play.  That's right, the easiest.  That's because ALL 5 black notes are played, and the thumb gets to play it's white note in between.  Right hand puts 2 and 3 and the sets of 2 black notes, and 2 3 4 on the sets of 3 black notes.  Every time.  The thumb simply plays the white note in between.  Left hand?  Same thing.  3 and 2 on the sets of 2 black notes, and 4 3 2 on the sets of white notes, with the thumb playing the white notes in between.  You can chunk it out by playing the two black notes together, thumb plays his solo, three black notes together, etc.

Finally we end on C-flat major with it's 7 flats.  Yikes!  Oh yeah, this is B major, the one we left back an the beginning when we started following the circle of 5ths up on our first printable with C, G, D, A, and E.  And look, this one starts on a white note too!  And the right hand fingering is even the same as our lovely scales at the first.  We're still chunking out the black notes with 23, and 234 with the thumb playing the white notes.  How cool that everything has all come together so nicely in the end.  At least for the right hand.  Left hand can't start on 5, it's got to chunk out those 5 black notes with 32, and 432.  Well, we'll start with 4 just to make things easier, then go up the scale as shown on the printable.  If we were to keep going, we would be putting our thumb on B as we went up and back down the scale.  End on 4.  Because it's easier and we're lazy when we can get away with it.