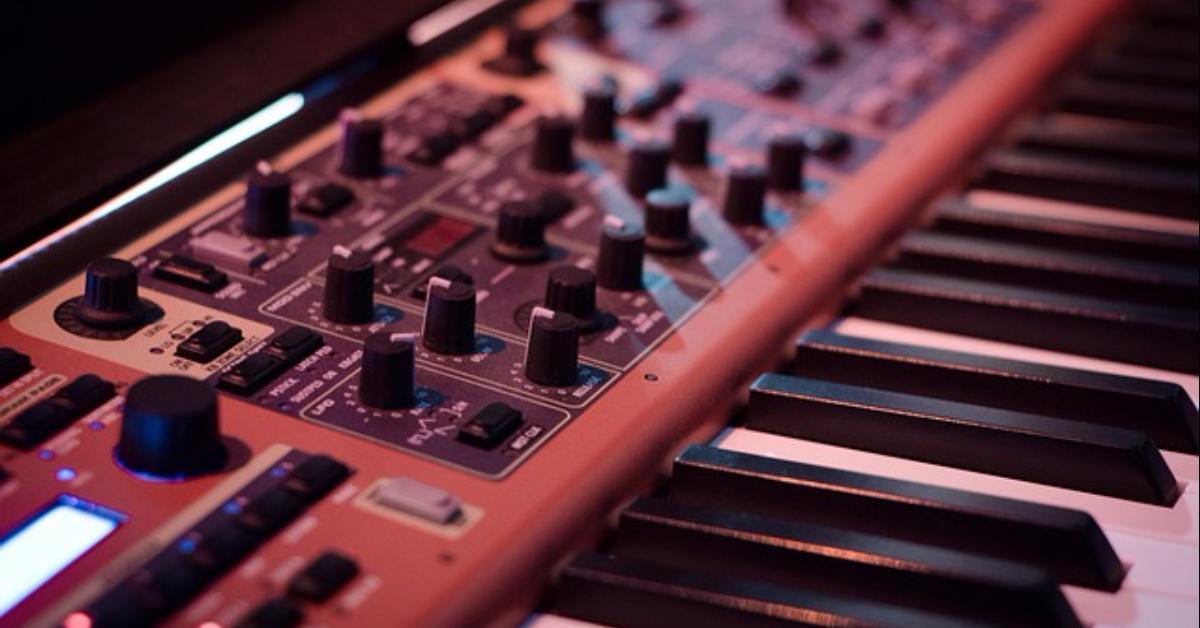 Computers have become such a regular part of our lives that it's hard to imagine a life without them.  Yet it wasn't very long ago that they were a luxury of the wealthy and the corporate world, not long ago that our pioneer ancestors lived in the horse and buggy age.  I'll spare you the dialog of when my family got our first computer during my teenage years and jump right in to how the computer age influenced the world of music.  Learning about electronic instruments is a fascinating rabbit hole and a journey worth taking.  The sounds are familiar to us from the media and it's time to learn where these sounds come from.

Pronounced "mohg" and not resembling anything to do with a white liquid, the Moog is the quintessential electronic instrument.  Invented over 50 years ago, we still associate sound effects created with this instrument with science fiction and futuristic settings.  I won't go into the history and complexities of this instrument, there's wikipedia for that, but I will say that the Moog Synthesizer is one of the most complex and versatile instruments in the world, surpassing even the organ in it's musical possibilities.  What follows is a great sampler of music created on the Moog.

This mini documentary is also fascinating if you have time for it or as the case may be, if your children have the attention span for it.

This one is definitely one of my favorites.  The sound of a Theremin resembles a high soprano vocalist.  Famously used in the Beach Boy's classic "Good Vibrations" and shown here in the Star Trek theme, the instrument is meticulously played touching nothing be the air immediately surrounding the instrument.  One hand controls the volume and the other pitch.  We are electric beings, you and I, and our bodies have an electric signal that can interact with electronics.  I think that's what fascinates me most about the Theremin- it creates a symbiotic relationship between human invention and our own electric energy.  Anita Darian was a famous singer/vocalist who often imitated the Theremin in songs like "The Lion Sleeps Tonight".

Since this blog is focused on music education for children, Bruce Haack's work deserves a solid mention on this page.  He wrote several albums for children.  Influenced both by his love for music and his background in psychology, his albums were designed for movement classes, helping children to express themselves in an emotionally positive and creative way.

Haack was one of Mr. Roger's neighbors.  Would you like to meet him?

Just for fun, here's a psychedelic collaboration Haack had with artist Tiny Tim.

Remo Saraceni and the Big Piano

Although Remo Saraceni is not a household name, there are very few who have not seen his most famous invention, the giant step-on piano featured playing Chopsticks and Heart and Soul in Tom Hank's movie "Big".  Saraceni is a friend to children not only in the musical sphere, but in his interactive exhibits in children's museums as well, such as the Cincinnati Children's Museum and the one featured Mexico City.  Light.  Movement.  Sound.  These are the elements Saraceni works with best.  In the rare interview below, you can see him interacting with children with his inventions and get a taste of his work.

Saraceni is also the mastermind behind the piano stairs movement.

I know I have barely scratched the surface of this wholly digitalized genre of music, but these are the inventions and works that have stood out the most to me and are as good a place to start as any.  There is so much to learn about the history of music, of how the piano was invented, of the Stradivarius violin, and so forth, but there is also a largely unknown aspect to instrument history now a couple of generations old.  Learning about electronic instruments and the sounds and music they create is a great way to balance your music education as we move forward and discover yet even more ways of making music.  What will the next generation come up with?