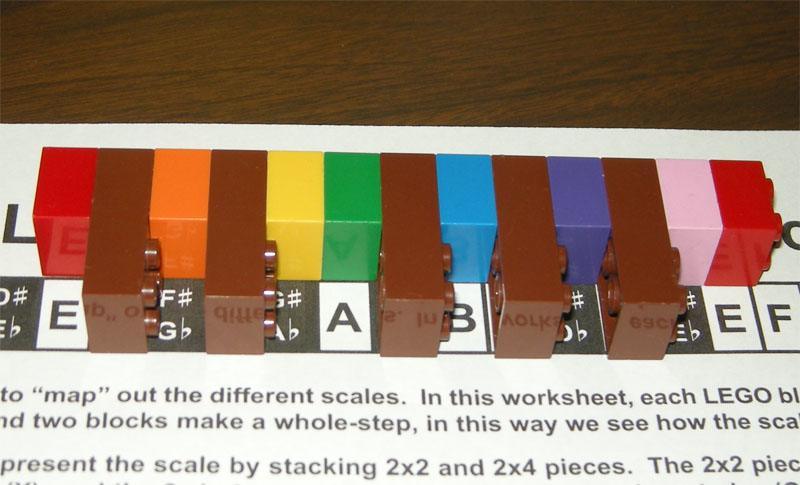 This printable is currently only available in our members area.

Build a Lego tower to "map" out the different scales.  In this worksheet, each Lego block represents a half-step, and two stacked blocks make a whole-step.  By making a model of the major scale and playing with it, children get a rare chance for a hands-on manipulative activity to aid in easily and quickly identifying the notes in the scale. It's Lego Piano time! 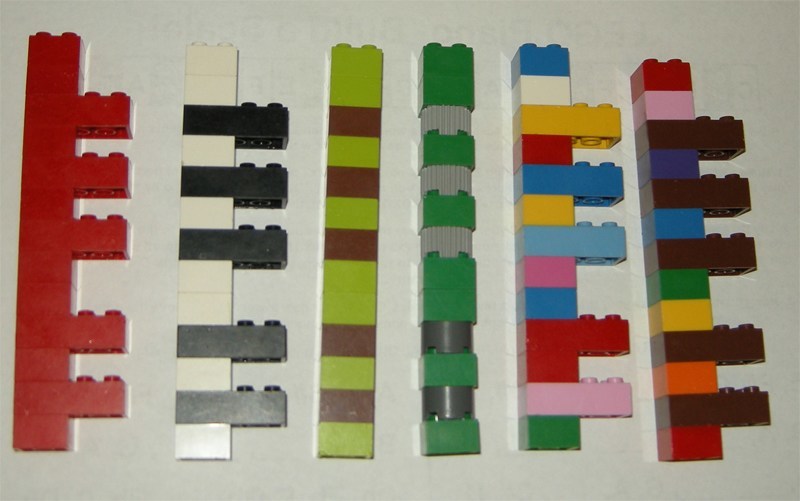 Left-to-right, here's a little commentary on each tower "map", left to right.  They will all work, but there are some pros and cons to each.

1.  Red- The pattern is set by the size of the blocks, so the color doesn't matter.  2.  Piano- this pattern is fun for the C-major scale, but the black-and-white blocks can be confusing against the black-and-white of our template when the colors don't match.  Perfect for C-major, less perfect for D-flat major.  3.  2x2 blocks- see commentary below.  4.  This one is just a little bit silly, to demonstrate that you can really have fun with these maps if you like.  Lego heads are the same height, as well as many other pieces, all you need is something to differentiate between played notes and non-played notes.  5.  I just grabbed random colors out of our bin- you just need eight 2x2's, and five 2x4's and it works.  6.  We have a lot of color-coded material on this website and this matches- see commentary below.

Using the "map" to build other scales

Now it's time to place your "map" tower on the printable and see which notes will build the chord.  Place your new "map" above the note that you want to build a scale on, then look to find the names of the missing notes below.  In this case, we are building an E-major scale.  The notes are, E, F#, G#, A, B, C#, D#, and back to E.  Notice how, in spite of whether the notes are sharped or not, the letters themselves follow alphabetical order, aka, EFG, ABCDE.  This is important!  Every major scale will follow alphabetical order, and this is how you can determine which black-note name to use.  We don't want the scale to go from Gb to G#!  Nor is F# to Ab the best choice.  In that light, here's a tip for filling out the worksheet- before you play with the tower at all, you can write in all of the letters you will need first.  THEN put the tower down to see whether the notes are black or white.  You'll only need to change the C to a C# and won't be left wondering whether you should have used a Db.

In the illustration above, I used the same colors we have been using for a lot of our printables and games on this website.  It's the colors of Boomwhackers and colored hand-bells, at least for C-major, but I use movable-Do for most of my own printouts.  Red=Do, Orange=Re, and so on.  By building the tower with these colors, not only can we see which notes to use in this scale, but also which scale degree they are.  Where is "La"?  It's C#.  And "So" is on B.  Pretty nifty, right?

Lego Piano Tower with one size

While it may be easier to use two different sizes, allowing one kind to cover up the notes you don't need, you can also make a functioning tower with pieces all the same size.  Now colors become very important.  It may be tempting to use black and white blocks when you are building, especially if you are patterning your tower after the grid, but I recommend staying away from black and white because it can be confusing when matching up the notes.  If you are copying the white-blocks to black notes, it may be tempting to write the answer of the white note right next to it since your brain is thinking "white".  It's better to be matching a different color altogether.  In this picture, I have used green and brown.  Building the G-major scale, I only need to match up the green blocks to the notes below to figure out which notes are part of the scale.  It's much easier for my brain to connect that my only black note will be F# when I'm dealing with four different colors.