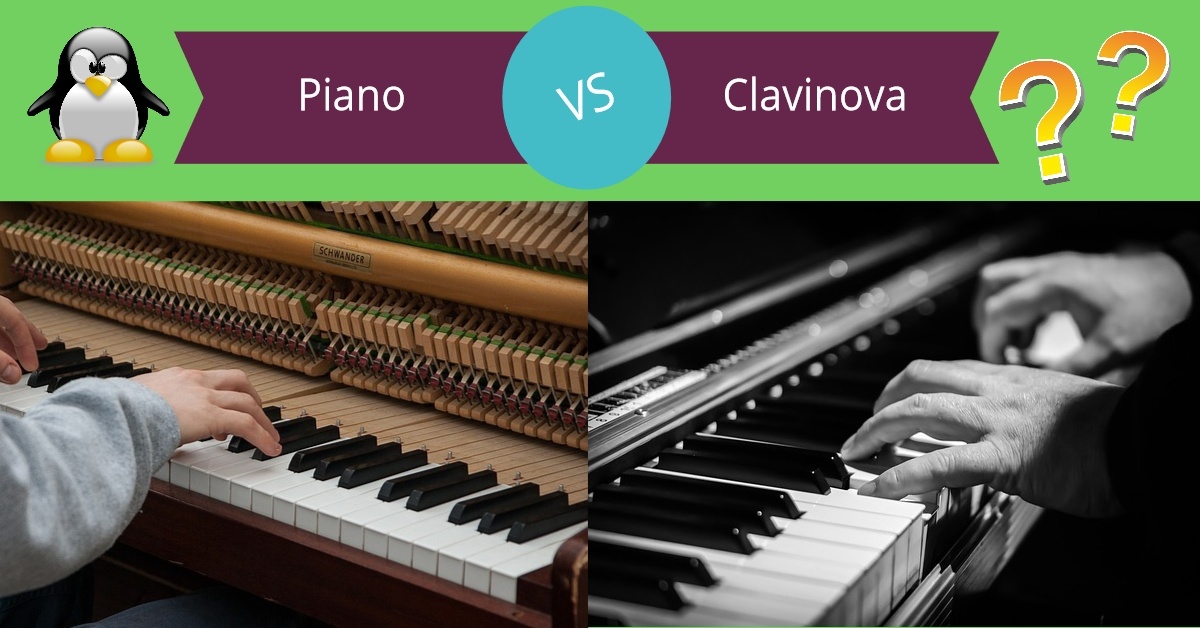 Time to get a keyboard?  Which kind should you get?

There is no right for everybody, there are pros and cons of each. As I tell you my family's personal experience, I'll give you some weighing factors to consider including price, durability, maintenance, and user experience.  In the end, the question of piano vs clavinova is one only you can decide, but I hope this article can help.  And in case there is any confusion, I want to point out that we're not talking about a rinky-dink keyboard here, clavinovas are serious instruments with full-sized, wooden keyboards and professional features.  Now that we've settled that, we can get started.  🙂

The biggest benefit of having a piano is that it is a "real" instrument.  There are mechanisms inside- hammers that hit strings, acoustics that we still haven't been able to replicate.  Because of this, a genuine piano can be a lot more fun to play.  Sure, a clavinova is perfectly in-tune, but the slight variations of every piano give it character.  I love to play with the acoustics on a real piano.  One can demonstrate sympathetic vibrations by pushing down a key without hitting the hammer, waiting for silence, and then while still holding that key down, play the note an octave below it.  Because you are holding the note down, the hammer is not dampening the string, and it is allowed to freely vibrate.  Try seven notes below- not the same effect.  An octave, two octaves, and a perfect fifth below will all produce different sounds.  This is an experiment I love to do with children and we haven't had that opportunity with our clavinova. 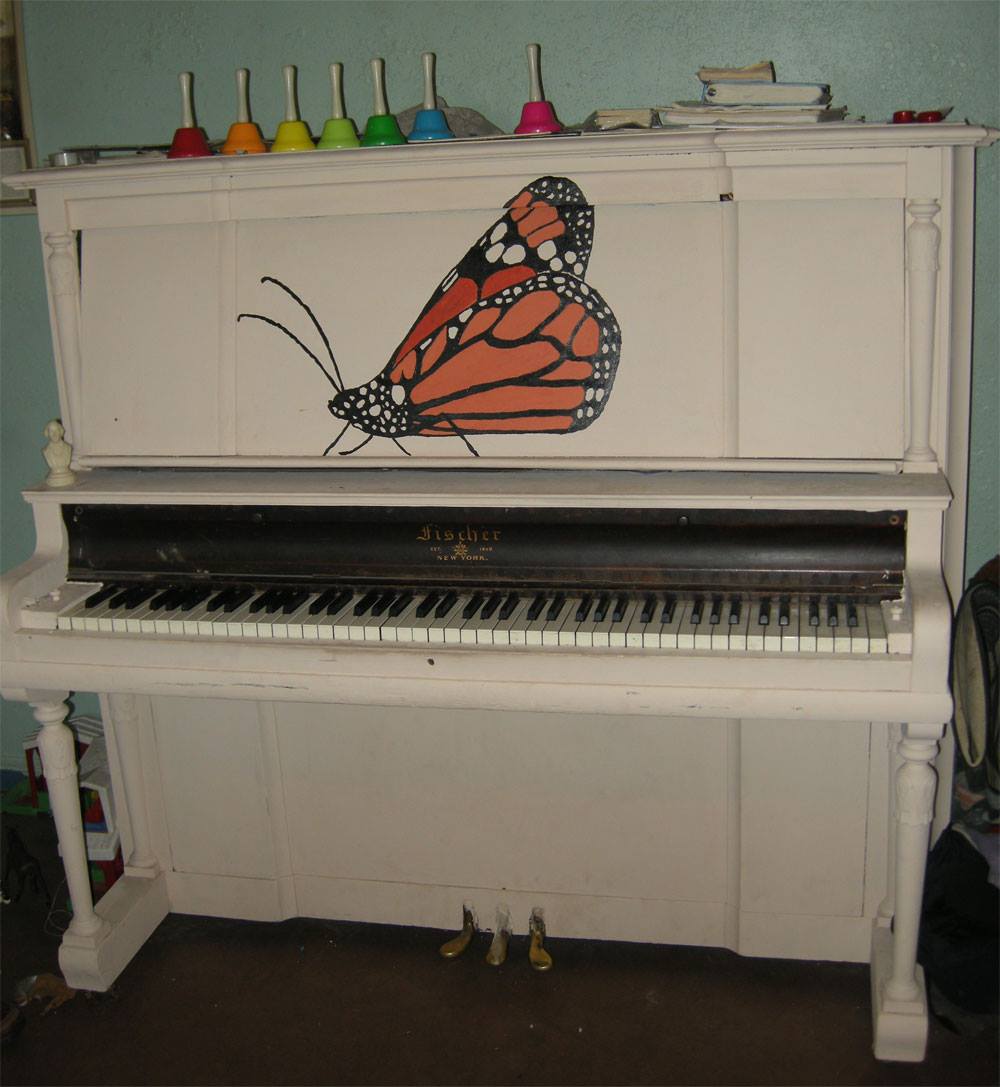 Pianos are simply more charming.  Period.  ​Sure the clavinova may have more bells and whistles, but when you digitize something you loose a little bit of character.  People don't paint old clavinovas like they do pianos, and I've seen a lot of lovely painted pianos in my time.  The beautiful butterfly pictured was done by my sister.  She has added more art since I took the picture and their piano is so fun to play!  I just can't see someone devoting that kind of time and creative energy to a clavinova, although it's perfectly possible.  Why is it that real pianos lend themselves to this kind of art?  Because there's something about them that is more genuine.  Plus you're not going to find a 100-year-old clavinova anywhere and some of those old beauties have some amazing woodwork in them.

Another benefit is that there is no need for electricity.  Not that the clavinova is an energy hog, but depending on your situation, this can play a big role in the decision.  How reliable is the electricity in the location you'll be putting the piano?  If you're putting it in a cabin somewhere, or if it needs to be in the middle of a room, a piano would be a better choice.  And for all those preppers out there, now that you've got your emergency food storage and survival gear, how are you going to entertain yourself when the zombie apocalypse happens and there's no electricity?

How about durability​?  If the instrument will be putting up with heavy use, a piano is made of harder, thicker wood.  While this makes it much heavier (a con), it also means that it can stand up to harder (ab)use.

Let's talk about the cons-  A piano costs more money.  Brand new or used, this is the case.  While you are more likely to find a real piano at the thrift store, there are plenty of people selling their clavinovas online, and dollar-for-dollar you'll get a decent clavinova in a lower price range than a piano.

There's also the inevitable time when the piano needs to be tuned.  Did you just move?  Tune the piano.  Has it been a year?  Tune it again.  Is your piano old?  Tune it more often.  And while the professional tuner is working on the piano, he might just notice a few other tweaks that need to happen (Oh!  So THAT'S why that note always sounded so tingy!).  While a clavinova is not impervious to abuse, a piano is simply a higher maintenance instrument.  Be prepared for that.

I've already touched on the fact that clavinovas are less expensive and are lower mainenance, but that they also need electricity, so let's talk about some features unique to the clavinova.

So many voices, so little time!  Are you playing a Bach Invention?  It's so fun to play it with the harpsichord!  A childlike song?  Try the music box.  A mythic piece sounds great on the wind chimes.  And on and on.  Playing with a variety of sounds, and even recording with them, is a wonderfully fun and engaging way to explore what music is all about.  And while we're at it, I'll add that it's very convenient to have a built-in metronome.

MIDI capability- This cannot be overstated if you want to do anything at all with computers.  MIDI can be used to help you transcribe music into sheet music with a notation program like MuseScore or Finale.  Although I seldom use it for this purpose, some people love it.  But for teaching children music, which is, after all the focus of this blog- there are some great computer software programs out there that only work if you have a MIDI connection.  You can record your playing to a MIDI file and combine it with other MIDI files.  You can buy lesson books with MIDI recordings and play duets directly with your piano.  There are probably many other MIDI features I don't even know about- technology is moving so fast. 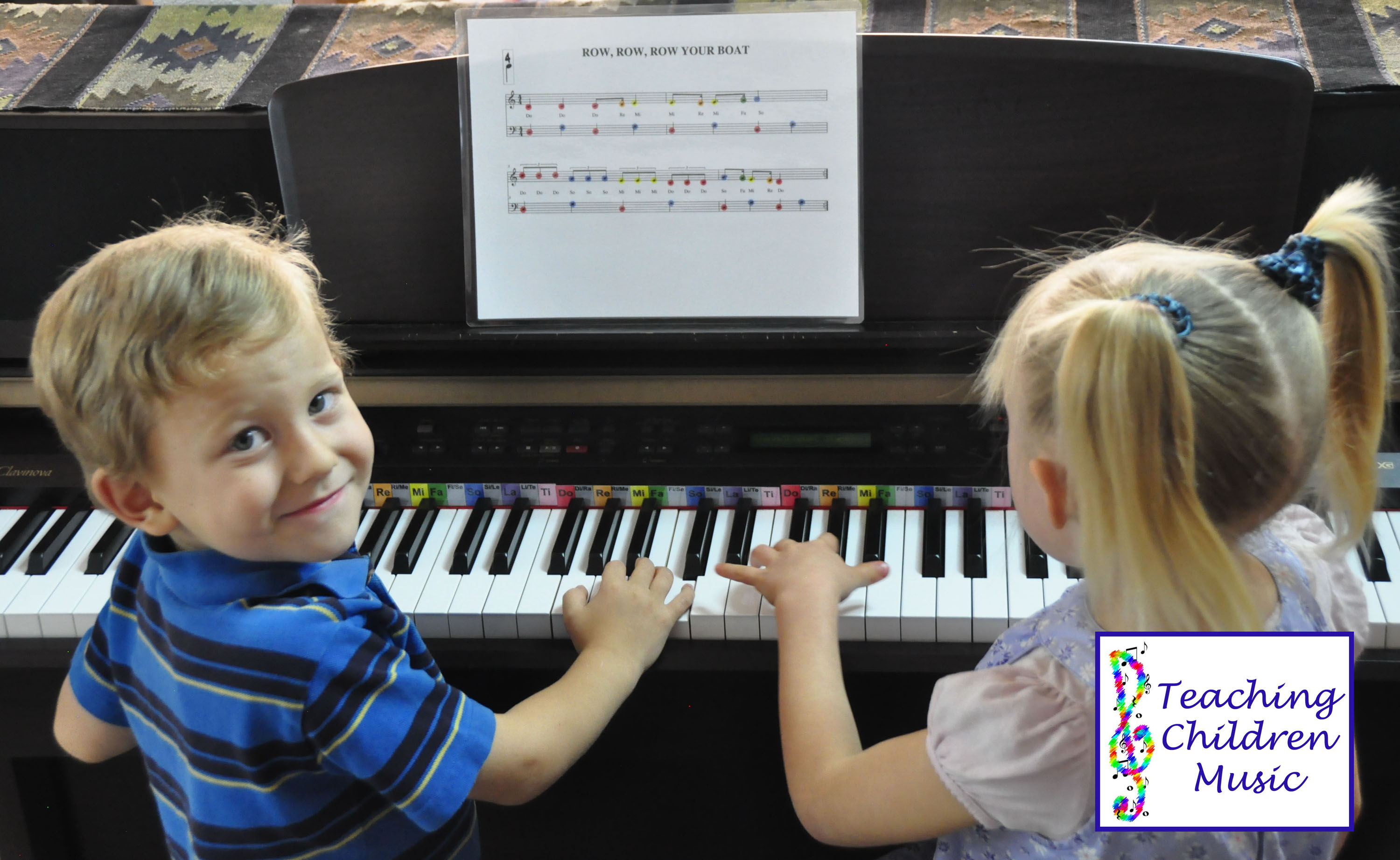 The clavinova is lightweight.  I know​ I already touched on this in the piano section, but I want to emphasize that a clavinova is MUCH lighter than a piano.  We have moved several times in our marriage and it has been wonderful that my husband only needed one other man to help him move the clavinova around.  A piano often needs 4-5 men for carrying.  If there are macho women out there that love to lift pianos, don't think I'm being sexist and leaving you out, it's just a reality from my own world that even a clavinova is heavy and I was happy to let the men do it.  The clavinova is heavy, but not like a piano.  Not even close.

You can be the only one who hears what you're playing.  There's this wonderful invention called headphones that just don't seem to be compatible with a piano.  Plug in the headphones and the only sound others will hear if they're close enough is the click-click-clack of your fingers on the keyboard.  That's a benefit for you if you if you're self-cautious about your playing, and a benefit for others if they're watching a program or having a conversation in the same room.  They're just optional, but they've been a very handy option to have.  I have even recorded music in the middle of the night with headphones and a line connecting the keyboard directly to the computer.

However, sometimes the "off" button can be a real pain.  Well, at least if there are tiny children in the home.  Growing up with several younger siblings, I got used to playing through my pieces without being bothered by tiny fingers tinkling on the upper notes or even banging on the lower ones.  I can concentrate through it and still enjoy my time on the bench.  However, my toddler has discovered the "off" button on the clavinova, and he LOVES to come in and push it.  Doesn't matter if I just read him a story, doesn't matter if he was engaged in his blocks.  He hears that piano, and as often as not he'll get the idea in his head that turning off the clavinova and watching Mommy react will be a fun thing to do.  He's getting better.  I'm getting better and seeing to it that he's properly engaged and jumping on opportune moments too.  Still, it's a hurdle I've jumped with each and every one of my kids, so buyer beware!

In closing, I want to reiterate that the clavinova is not a cheap-o keyboard.  It doesn't sound like a cheap-o instrument, even if it lacks the richer tones of the genuine article.  Still, the clavinova we had is a full-sized keyboard made with the same wooden keys a grand piano would use.  They recorded the keyboard sounds on a state-of-the-art grand piano with state-of-the-art equipment.  As a musician, I was very happy with the clavinova and we only parted with it because we were moving so often, living in an RV and were worried about the summer heat destroying it in a storage unit.  Our friends who have it now live about two blocks from the ocean and the humid, salty air would have done a real piano in, so the clavinova was a great choice for their environment.  When we get settled in to a new home, we will be choosing a clavinova first.  However, we would really love to have a real piano too when the time and funds happen.  Maybe a piano will be a better choice for you, I don't know.  I just know what my experience has been and I hope there was some kind of insight in this article that will help you make the best choice for your family.  Thanks for reading!