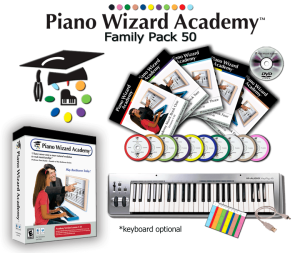 Piano Wizard, how do I love thee?  Let me count the ways.  But first, let me give you a tour.

I love the fun animation that draws my children to the program.  They can practice the same song on levels one and two in several different “worlds”, with a variety of icons.  They can choose whether they are in the ocean, in outer space, in dinosaur land, or skiing down the hill with Santa Claus, among other things.  This variety makes practice time less dry and more fun.  In the beginning, it is very much like a video game- a wonderfully fun video game- but it goes much farther than that.  Piano Wizard works like training wheels with the goal of getting you OFF the computer and into your piano books.  The best part is that my children recognize this important difference and long for it as much as I do.  They love to learn the song on the computer, which is a safe haven where they can learn the correct fingering, rhythm, steady beat, and correct notes in a fun environment.  However, like me, they recognize that this is just a game mode and they want to play out of real books, without the aid of the screen.  My 4-year-old daughter was quite proud of herself when she took the book to Grandma’s house and was able to play for her on their non-electric piano.  From the beginning the curriculum is designed to get you off screen and I love it.

I love how the curriculum starts at the very beginning but progresses rapidly.  Like many piano courses, it begins on the two black keys- notes that are easy to find, and promote better hand posture.  Here my 2-year-old plays the first song on level one.

And here my 4-year-old plays the seventh song on level 5 (out of the book).  We filmed this two days after she started this song.

My 6-year-old son has really struggled putting his two hands simultaneously together in the past.  In songs that require it, his approach has always been to play the left hand first, hold the notes down, and then add the right hand.  Otherwise he has done quite well in the piano, knowing the rhythm and quickly picking up how to read notes.  Anyway, it was the hands together thing that has really been a struggle for us.  Here he plays “Merrily We Roll Along”, which is the fourth song in the curriculum, on level three.  Within 5 minutes Piano Wizard had him playing two notes together- something I, with all my piano teaching experience, had failed to do up to this point.  So this next clip represents a major breakthrough for us.  It has not been the last.

One thing about the software that at first I wondered about but now, having seen it in practice, have grown to love, is the way Piano Wizard scores your playing and only reinforces correct behavior.  You can play all the wrong notes that you want and it won’t dock your score.  To a degree that’s where Mom comes in.  For example, in the first song that only uses the two black keys, a child could hypothetically bang on those two black keys with both hands the entire song and they would get 100%.  That’s cheating and I tell my kids it doesn’t count.  But in actual practice, if the kids DO start banging around and loose their focus, they get a lower score, and they know it.  They know that they have to get 90+% to get their sticker and finish their piano for the day, and to do that, they have to focus.  If they are playing a lot of wrong notes, they won’t score high enough because that 10% margin of error is usually applied not to wrong notes but instead to late notes- if you don’t play it in time, you don’t get credit.  So there is a major focus on playing the right notes at the right time- only then will you get the high score you seek.  I also like this because, let’s face it, there are a lot of little kids in my family.  When I practice, it’s nice for me to be able to focus on my own game without having to shoo them away.  They can bang on the upper and lower keys all they want and it won’t effect my score.  They can improvise around a melody.  If they are memorizing a song, they can tell the software to play either the left or right hand only while they play hands together, then they can work on hands together with the visibility challenge shown in the first video. The icons in levels 1 and 2, and the notes in levels 3 and 4 have animations that will ONLY be activated if they are played at the right time.  If an icon fails to turn into an animation, THEY know, without my input, that they have missed that note, and because they want a better score, they will try harder to fix it next time OF THEIR OWN ACCORD.  Children are not that unlike birds and other animals- they train best with positive reinforcement.  This software gives it to them.  As a piano teacher, I used to mostly only point out notes played incorrectly to my students, telling them what was wrong and how to make it better.  Granted, I was always eager to praise them and I tried to always give them as much praise as I could.  But it is impractical and would be rather annoying if I were to say “right, right right” after every correct note they played, staying quiet on the notes they missed.  But it’s not annoying for a quiet animation to do the same thing.  Teaching my own children, my role is to pull out the stickers when they get a 90+% score, and then to give them feedback as a regular piano teacher when they reach the 5th level.  This is something that does not take years of training to do, and I imagine most parents will be able to help their children in this way.

As my younger sibling’s piano teacher, I am not there every day to help them practice, but Piano Wizard will likewise transform my role as a teacher.  Instead of the standard model of them coming and passing off every song before being assigned a new one, I will now be more of a mentor.  They can show me their progress, but they don’t need me to stamp my approval on every song before they move on.  Instead, I will help them work on their goals, give them feedback on their technique and form, offer suggestions, and help them learn how to compose their own music- music that we can plug into this software.  I loved having piano lessons with the “mentor” model when I was a teenager, but now I can teach with this model much earlier, and I have Piano Wizard to thank.

(some of the images in this video are outdated, but I like the general overview and how the methodology is explained in this video.)

Piano Wizard is also great for teaching improvisation, not just in jam mode, but during regular songs as well.  I would love to do a separate post on how I do this, but I cannot promise it right away.  Someday.  I love Jazz piano and played in the Jazz bands when I was in college, so this is a subject that is near and dear to me.  I am excited at how Piano Wizard is so adaptable for so many different needs, and this is another one that it meets beautifully.

I love the online campus.  When you purchase the Piano Wizard curriculum, you become a “gold member” and have access to bonus materials, videos, as well as the free-version content like the forum.  I have not fully explored this resource yet as it is vast, but I was particularly thrilled with one of the bonuses- the LDS Hymns and primary songs.  One of the reasons the MIDI adaptability was so appealing to me is because I want my children to learn these songs- to be able to practice the songs that they are learning in primary, and to be able to play the hymns as they grow older as there is always a great need in our church for members with this skill.  In fact, in Utah among Mormons, it is a popular requirement for parents to tell their children that they have to take piano lessons until they can comfortably play the hymns.  Only then will they let them quit if that’s what they want.  Many parents told me this was their goal when I was teaching piano.  As a parent, I’m not much different.  While I want my children to be able to do more than just play the hymns, one of my primary goals is to prepare them well to be able to serve the church as a musician- both in playing the hymns and being able to serve as an accompanist.  So I had the goal of making MIDI files for the hymns and primary songs.  I was SO thrilled and impressed that this was one of the bonuses available for download from the academy.  If you are LDS and have similar goals for your children, you will be happy to know that Piano Wizard has made this part easy for you.  There is also a wonderful library of Christian music, so while the Piano Wizard curriculum itself is a secular program, some of the bonuses make it very easy to adapt it for religious use.