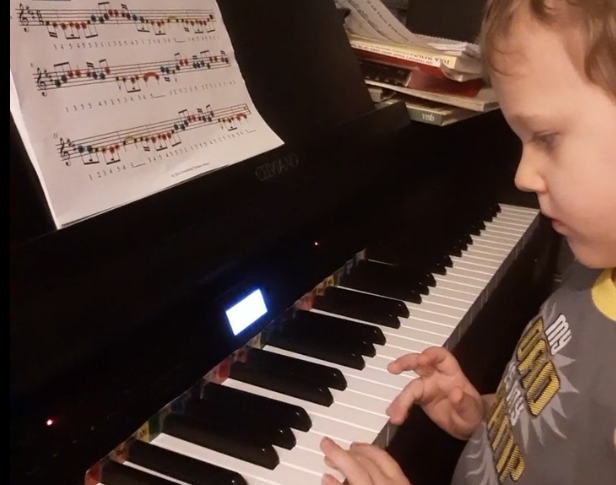 We had a break-through in my 4-year-old's musical development this week, accompanied by the kind of drama that could only come from such a child's antics.

Last week I shared this Looney Tunes video with subscribers to accompany St. Patrick's Day since it is a beloved Irish melody with a little humor.  I also shared it with my children, and my 4-year-old was particularly amused and watched it several times.

Comedic tip:  Notice how these clips use "the rule of 3", which is one of the best rules of comedy.  You do something once, repeat it to establish a pattern, and on the 3rd delivery, you deliver your punchline, or change something for comedic effect.    Our protagonists play the song wrong 2 times, and the "bad guy" plays it correctly the 3rd time through and sets off his own trap.

Later that day I tried to see if I could film him, and he agreed to try.  We went into the room, but before he had a turn, I agreed to let some of the other kids play through it, since they've been in on the joke and the fun too.  I should have let my youngest go first though, because one of the older kids said "Wouldn't it be silly if there really was TNT in our piano?"  My youngest lost it.  He was in tears and it took awhile to comfort him and convince him that there was NO TNT in our piano and that we had no intention of EVER buying any TNT, let alone bringing it into our house.  He watched cautiously as every other kid played the first line correctly with no explosions, but still refused to touch the piano himself.  Later that evening, he paced around our kitchen island for the better part of a half hour talking to himself about how there isn't any TNT in our piano and that our piano is safe to play.

Poor kid!  Fortunately, he has since overcome his fear of the piano, because the next day my daughter ran upstairs and told me, "He's playing it again!  Grab the camera!"  I did, and the resulting video is what I was able to capture.  He was in the middle of sight-singing through it, so it starts mid song, and that's probably as good as I can hope to get.  He begins playing the piano at around 1:12, although I wasn't able to get him to play the whole song.  I still think this video captures his learning process, which I think is the whole point at his stage.  Plus he's really cute, so there's that...

His request to play it on the bells from Prodigies was an interesting one since it has been a few months since we pulled them out.  He went right to it though!  Having several mediums to play with has been very good for my children's musical development.  In the beginning stages, technique is not as important as developing a musical vocabulary.  Having multiple tools for that has been such a blessing, and it is the colors and solfege that tie them all together.  We practice solfege regularly as part of our homeschooling, and even though my youngest may not always fully participate, he does have the exposure, and it has been very rewarding to see everything click for him with this song.

Now if I could just get him to play more than the first line on his own!  If I sit down with him, I can often get him to finish the piece, but in the days since this initial filming, the earworm from the Looney Tunes clip is what he chooses to play.  Over.  And Over.  And Over.  On the piano.  On the bells.  Singing while he eats.  Singing while he plays.  Watching it 3+ times in a row when he gets screen time.  He especially loves the WWII clip at the beginning.  Isn't it funny how young kids love repetition?  I'm just grateful that this time his obsession of choice has been so good for his musical development.