While I enjoy using flashcards and other similar activities for bench learning, sometimes it's fun to have a get-up-and-move activity that is still educational in nature.  Balloons are very large manipulatives that are fairly inexpensive and they are colorful!  I'm always on the lookout for rainbow colored things to use in relation to the color-coded scale.  I found one package with every color but purple for $4.50 and another with just purple of the same size for $1.50, making a total of $6 for 84 large balloons (prices approximate, it was a couple of months ago).  Without further ado, I give you 5 Musical Balloon Activities you can do in your home, studio, or in a classroom.

​Who can resist the enchantment of walking under a rainbow balloon path?  This first activity is incredibly simple- give a starting note, sing it as "Do", then sing the scale as you walk under the balloons.  Red = Do, Orange = Re, and so on.

If your child/student is comfortable with the scale, you can really shake things up by giving them a sight-reading path.  Randomly place the balloons in any order and then sing the scale as you walk.  Another variation would be to make a song with the balloons.  A limited number of balloons in the package may make the song idea cost-prohibitive, but if the song is short and sweet, it shouldn't be a problem with a normal package of balloons.

I made these balloons stick to the ceiling with static electricity.  My children lent me their heads for a couple, but mostly it was my own hair that ended up standing on end.  (notice I am not in any of the pictures?)  This is the fastest and easiest way if you are doing the activity quickly in a small group, but if they need to be up for anything longer than 10-20 minutes, you can simply tape them to the ceiling. 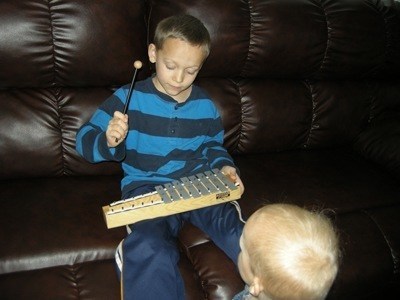 In this song, we had severall balloons all scattered about on the floor.  Our ring-master Peter would play us a "C", followed by one of the other notes in the scale.  We would guess which note it was by ear and then run to a balloon and grab it.  Simple, but fun! 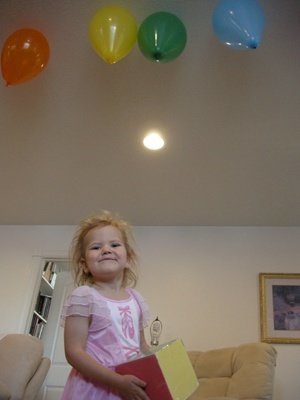 For this game we used are large colored die that we have had for some time now.  This large manipulative was cheap to make and has been loads of fun, not only for music games but for math games (taping numbers to the squares) and more.  However, you don't need a large colored dice to play this game.  You could make a simple one by coloring a regular dice with magic marker.  You could draw colored papers from a hat.  Construction paper works well for this.  If you own "Candyland", you could draw candyland cards (the Character cards are even pink, so you get all 7 colors!).  One way or another, all this game requires that you have a way to randomly select a color.

Once the color is randomly selected, the student stands under the balloon of the same color and sings the note.  In Ruth's case, it was "Mi", and I helped her sing it.  On her next turn, if she got blue, she would move to the blue space and sing "Mi-So".  I had my older kids figure out what the interval was between the two notes.

This isn't a win-or-loose game, simply a fun way to practice.  You could make it competitive by making a person be "out" if they sing their interval wrong.  If that's too easy, have them write down the solfege letters that they have had and sing the whole sequence on their turn.  This way the game starts out simple, but becomes more difficult as more advanced students are the only ones still playing.  Everyone gets to play, everyone can participate on their own level, and there is a social reward for doing well.  You really wouldn't need balloons to play the more advanced version, come to think of it- just a random color selector and maybe a blackboard.  Students get a chance to select the color, but everyone sings the same sequence.  Just thinking out loud.  There are so many ways to have fun! 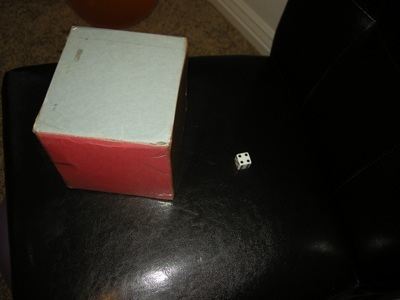 This game is similar to the shake and sing, with a more direct emphasis on intervals.  Do you like how even my two dice are?  Just using what I've got on hand!

Players randomly select a color and a number (by any means easiest for you).  In the picture above, we have blue (So) and four.  The student would then figure out which note is a 4th above So, in this case, Do.  Having the colored balloons arranged in a scale really helped them to visualize the process.  Once they figured out the answer, they raced to find a red balloon on the floor to grab.  I should have taken a picture of all of the free-floating balloons we had lying about, lol.  It was a lot of fun.

This last activity is not a game, but an object lesson.  Kudos to my 8-year-old son Peter for the idea when I told him I wanted to go for five activities.  This game will help you teach how to build major, minor, diminished, and augmented triads based on how many half-steps there are.  You will need 6 balloons of one color and three balloons of another. 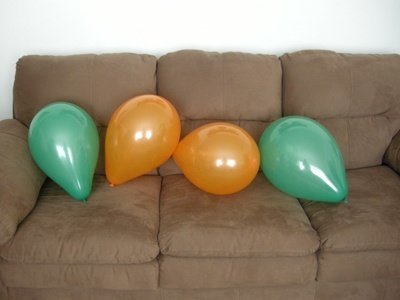 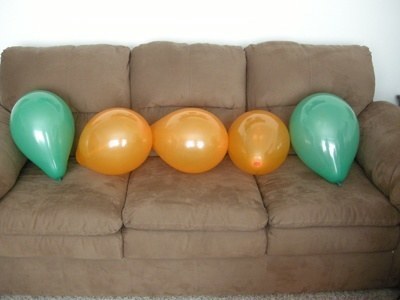 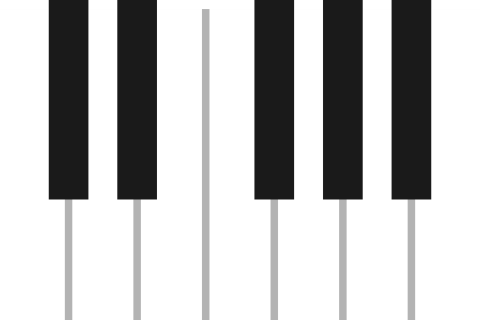 Now that we know how to build our thirds, the next step is to build triads.  A major triad is built with a major third on the bottom and a minor third on top.  A minor triad is built with the same number of balloons, only the minor third is on the bottom.  All I did is have my kids trade places in the picture below.  A diminished triad will diminish your balloon stash.  Two minor thirds.  An augmented triad will augment your balloon stash- two major thirds.

A major TRIAD would land the 3 green balloons on "C", "E", and "G".  Where would they each land if you built a minor triad?  A diminished triad?  What about an augmented one?​

If you are teaching this concept in a larger classroom, ask for 9 volunteers to each hold a balloon as you demonstrate the building process.  You might use a large piano poster, drawing on the chalkboard, or other large visualization so you can help your students visualize how the balloons would translate onto the piano.  Have fun! 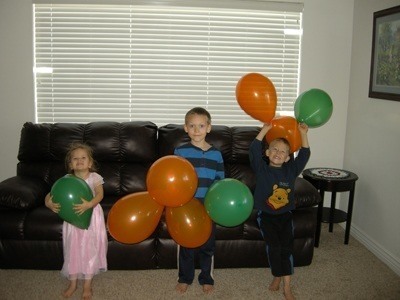 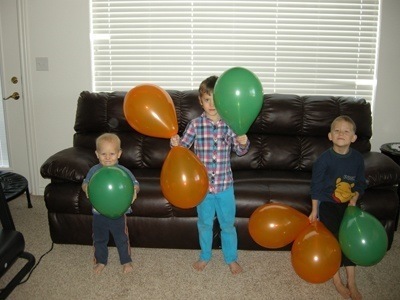 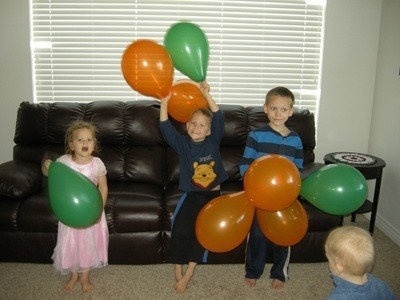 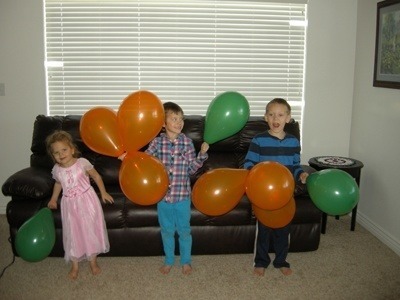