This printable in only available to our members right now. 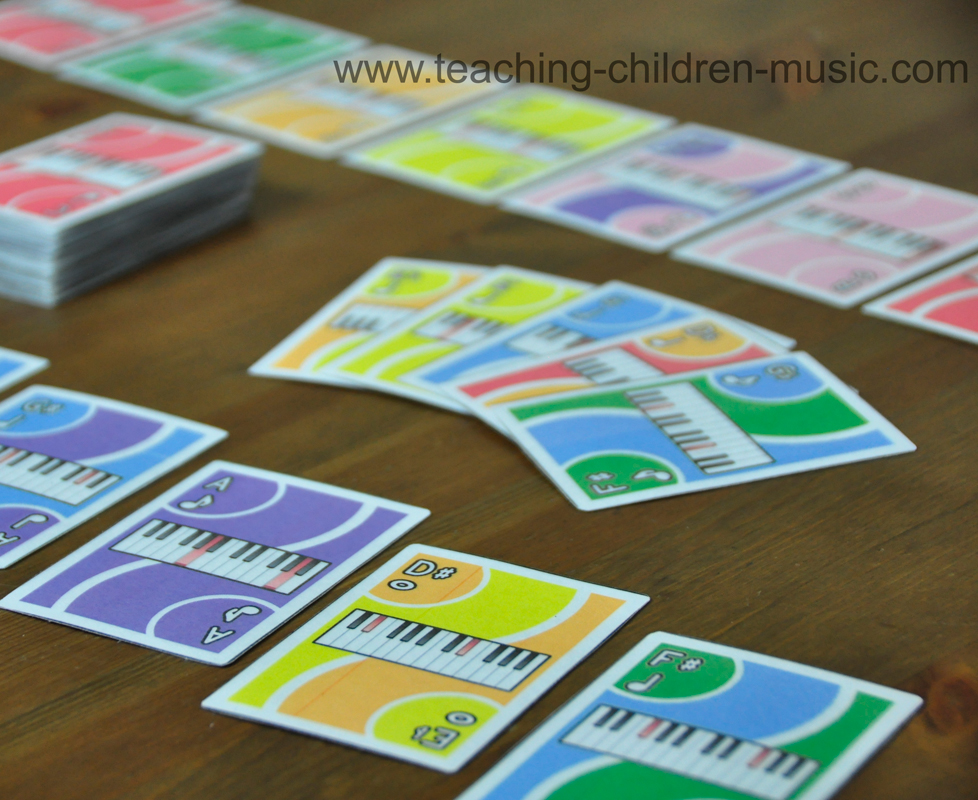 Contents: 48 playing cards consisting of the 12 notes on the piano, 4 apiece.

Here are a few music card games you can play with these manipulatives.

Playtime: under 5 minutes for seasoned players.

Piano Rummy is a card game that reinforces the structure of a major scale in a fun way, rewarding you for using the black keys, and penalizing the other players if they don’t! The strategies learned in the game can be applied to the keyboard. While the game is simple enough for children, game play with its variations are likewise stimulating for the professional musician.

Object of the Game: Earn the most points by constructing major scales or matching three of a kind with the cards. The game ends as soon as a player discards their last card.

Game Play: The youngest player, or the loser from a previous round, begins the game. After assessing their hand, they may choose to take the card from the discard pile, or to take a card from the deck. Then if they have three-of-a-kind with their cards, such as three C’s, they may play them by laying them down for everyone to see. They may also play 3 or more cards by playing the first three notes of a major scale, for example, by using a C, D, and E. Playing your cards during a turn is always optional, and sometimes it may be strategic to hold on to them. When they are finished, they MUST discard one card, laying it on the discard pile in such a way that all of the discarded cards are visible to the next player.

The next player begins their turn by drawing a card from the deck or by taking the top card from the discard pile with no obligation to fulfill. If, however, a card buried in the discard pile looks appealing, they may take that card and every card above it into their hand, provided that they play that bottom card they took during their turn. They can play their cards the same way the first player did, or, if a previous player has begun a scale, such as C, D, E, they can play an F in their own pile to continue that scale. They could also play an F and a G, or any number of cards that fit into the scale. If a player played an F, G, and A (3 cards), they must specify whether they are continuing a C scale, or beginning an F scale. When a scale is completed, such as C D E F G A B C, the scale is closed and no cards may be added to it anymore. When a player puts down three-of-a-kind, the fourth card can be added to the private pile of any player. Players can begin a new scale with their cards in any of the 12 keys during any period of the game. The player’s turn always ends when they add one card to the discard pile.

Game setup: Shuffle the cards and deal each player seven cards. Place the remaining cards face down in a pile and turn one card over to create a discard pile.

Gameplay ends when a player plays all of their cards including one left over card to discard and end the game.

Scoring the game: The cards representing the white keys on the piano are worth 10 points. The cards representing the black notes on the piano are worth 15 points. The Glissando cards are worth nothing when played, but are negative 20 if still in the hand. There are no “bonus points’ for spelling notes differently, such as calling a B a C-flat . Cards that have been played create positive points, and cards in the hand create negative points, even if they might have been played on the next turn.

Variation- harder- Scales and sets can only be made using cards of the same suite. The suites are an eighth note, a quarter note, a half note, and a whole note.

Variation- easier- Use only cards for one key signature. For C major, only the cards of one solid color are used, no sharps or flats. When playing this way, there is only one possible scale, so the scale can be made from any point. For example, the player would not have to have “C,D,E” to begin building a scale. They could place any three cards down as long as they are sequenced, such as “A,B,C”. A player with a “G” or a “D” card could place their card down in their own scoring area to build on that scale.

Variation- build major triads instead of three-of-a-kind. If you desire to build chords instead of 3-of-a-kind, the only major triads in C major are built with C-E-G, F-A-C, and G-B-D. After playing in C major a few times, you can either switch to a different key, or slowly add cards to expand game play. For example, the F#’s could be added, making it possible to build a C major scale OR a G major scale. Possible triads would be C-E-G, F-A-C, and G-B-D as before, with one new chord, D-F#-A.

This is an advanced solitaire game similar to Pyramid Solitaire. In this version you eliminate tri-tone pairs. Tritone notes are an augmented 4th/ diminished 5th apart, and they are exactly the same distance apart from each other going down or up. For example, C and F-sharp/G-flat are a tri-tone pair. Other pairs are C#/Db and G, D and G#/Ab, D#/Eb and A, E and A#/Bb, and finally F and B. Note that there are many different variations of “Pyramid Solitaire”, which you can find online and play according to your wish. The biggest think to know is that instead of adding cards up to 13, you find tri-tone pairs. Here is one version you can play:

Set up the cards to make a pyramid with 7 rows. The top row has one card, the next row has two cards, etc. The goal is to get rid of all of the cards, both in the pyramid and in your hand.

Gameplay: From the remaining deck, place two cards face up on the table. Find all available tri-tone pairs and place them in the discard pile. You may also have one “free space” in which you can temporarily place a card from the deck or pyramid in order to access cards underneath. When you have found all available pairs, draw two more cards from the deck and place them on top of the other two cards if they are still there. Find all available pairs, use the free space if desired, and continue play. Only one card can be in the free space at any time, and you can only remove cards with no other cards on them. You may only go through the deck one time. Good luck! If you get to the end of the game and there are cards left that are not tri-tone pairs, it means you matched up a tri-tone pair incorrectly somewhere else in the game and you loose. Be careful, the game can be tricky! If you pair up every card and eliminate the pyramid and the deck, YOU WIN!

Game play: 2-5 minutes per round

This game is a musical variation of the traditional game of Speed. The object of the game is to get rid of all of your cards as quickly as possible- before the other player!

Game setup: shuffle cards and place four cards face down on the table in a row. Now add three more cards to each of the outside cards. Now deal out the remaining 38 cards into two piles, 19 for each player. Keep them face down.

Gameplay: Count to three, and each player quickly turns over the center card in the center on their right and then draws four cards from their own pile. Now place your cards on the face-up cards that are one half-step away from card shown. For example, if there was a “C” card in the center, the players could place a “C-sharp/D-flat” card or a “B” card. If a player placed a “B” card on it, either player could then put a “C” card or a “B-flat/A#” card. Once a player plays a card, they may draw an additional card from their deck, so that they may always have four cards in their hand at any given time. When both players have exhausted their allowed moves, they will again count to three and turn a card from the outside over into the middle. Game play will again proceed. If neither player has won and the outside cards are also missing, turn over both decks to make two outside decks and turn over the top cards and place them in the middle to resume play.

This game is good practice for chromaticism fluency. Remember that C-sharp and D-flat are the same enharmonically, and remember where the white half steps are! (B to C, and E to F). Spread out, here is an example of what the game-play might look like on one of the piles.

Go fish- play just like a regular deck. If a player asks for “B-flat”, other players must remember that if they see an “A-sharp” in their hand, they need to give it up. Just because the “B-flat” part might be hidden behind other cards in their hand doesn’t mean they get to keep it! For younger players, take out the black notes and play with only solid-colored cards first. Then add in one black note set at a time. For faster game play, only require two of a kind to make a pair instead of all four.

Crazy Ace- Game is played like crazy eights except you call the “A” note an “Ace”, and it takes the place of the “8” card. Instead of matching cards to the heart, diamond, club, and spade, the suites are eighth, quarter, half, and whole notes.

Memory- take two of each note out of the deck, giving you a smaller deck of 24. Shuffle and place the cards face down. Take turns turning over cards trying to find a match. Match pairs are removed by the player who finds them for later scoring. When all the cards are gone, count up your pairs and the player with the most pairs wins!

Nearly any game that can be played with a standard deck of cards can be adapted for this deck. Let me know what music card games you come up with!