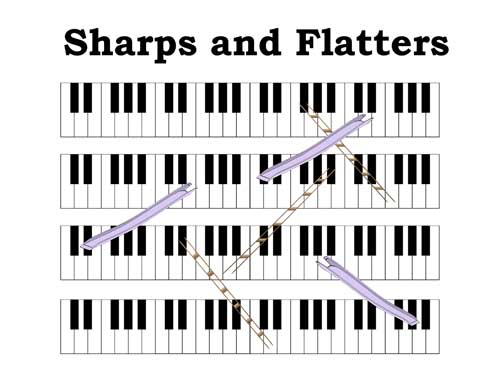 Sharps and Flatters is a simple printable board game based on chutes and ladders. It teaches/reinforces sharps and flats, as well as intervals.

Instructions for preparing the game: Print out the gameboard on cardstock, or regular paper. Laminate for best durability. Print the playing cards on cardstock so the players will not be able to see through the paper, as well as better durability. Cut the cards out and laminate if desired. Shuffle and place near the game-board, face down.

Gameplay: All players begin on the lowest "C" in the bottom, left-hand position. The youngest player goes first and play proceeds clockwise. The player draw the top card and follows the instructions on the card. If the player draw the "flat" card, they remain in the same place and the next player continues the game.

The number cards are not the same as interval cards. With the number cards, players move forward beginning their count on the first white or black note in front of them. Players will move further using number cards when they are on black notes.

Interval cards, on the other hand, specify a musical movement observable on the gameboard or hear-able on the piano or other instrument. Half-steps are counted by moving forward using white AND black notes. If a player is on a "C", and draws the P5 card, they will move up a perfect 5th, seven half-steps, landing on "G". Sometimes the interval cards will leave the player on a different color.

When a player reaches the end of a row, they move up to the next row beginning on the far left.

Slide and Ladders: When a player lands on the bottom rung of a ladder, they get to "climb" up a row, landing on the note above. The ladders represent sharps. For example, if the player lands at the bottom of the first ladder, a "D", they will be climbing up to a "D#".

Winning the game: When a player would land beyond the top right note (a "B") if the gameboard were bigger, that player is the winner!