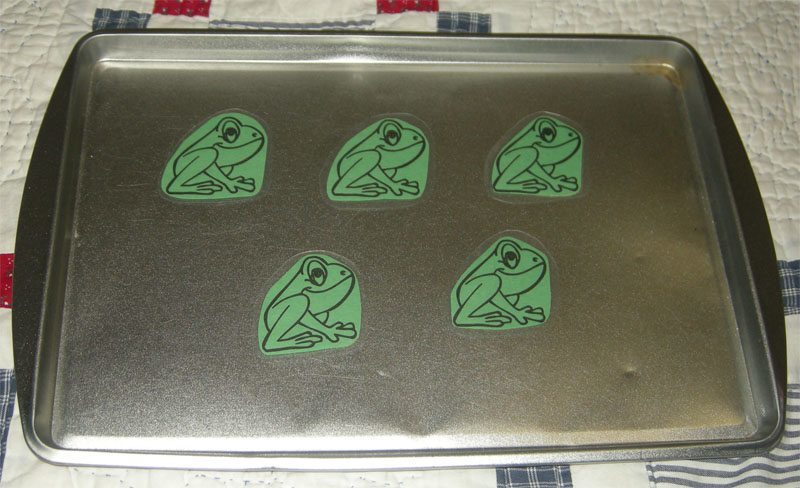 You really don't have to do anything fancy with the manipulatives.  Their primary purpose is to help children learn the counting songs by giving them something to count.  Pictured at left are simply five frogs.  You can count them and take away a frog with every verse.  With "Once I caught a fish alive" and "Ten Little Turtles", you will not be taking anything away in between verses, you will simply be counting the printouts while you sing. 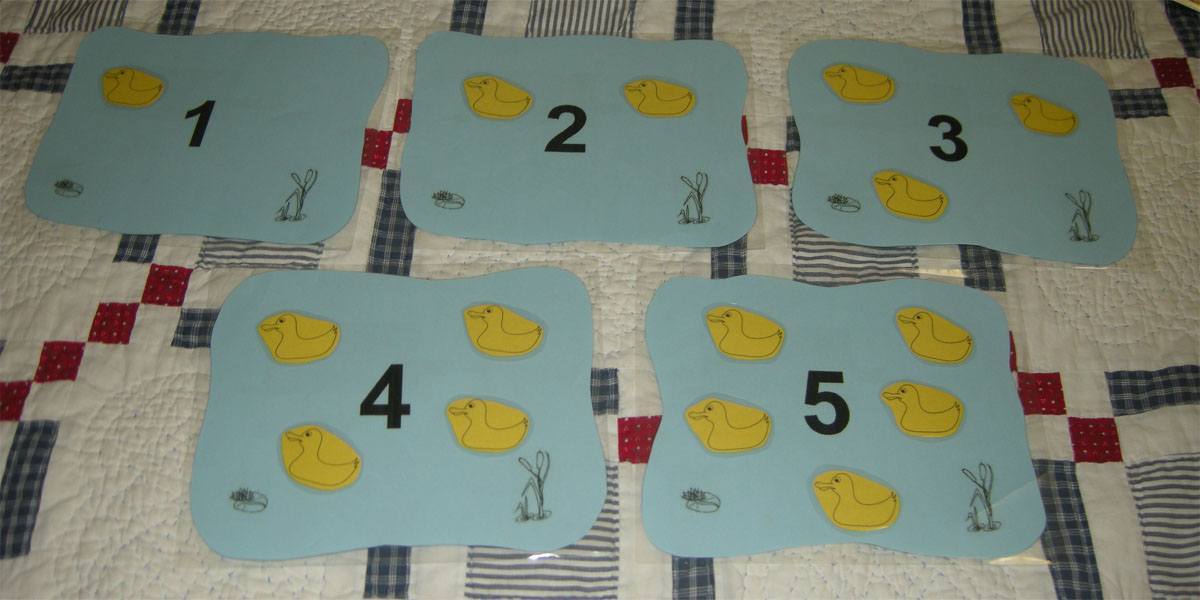 It's been more than 6 years since I made the Math Pond activities from which inspired these printables.  I did not make the actual pond printables for you because I don't have access to cute pond printouts that I can legally share and the ponds serve more as a math manipulative than a singing one, plus two of the songs I'm sharing today are more about counting to 10.  Still I wanted to share the idea.  I have done this activity with all of my children and they have all loved it, especially when they get to clear the boards with a fishing pole when we are done.  Seeing the numeral next to the actual number of ducks, fish, etc, has been very helpful as they grasp the concept that the numerals represent "how many".  The following videos were made during my very early blogging days and are very rough, but I'll share them anyway to illustrate how I use the ponds. ​ 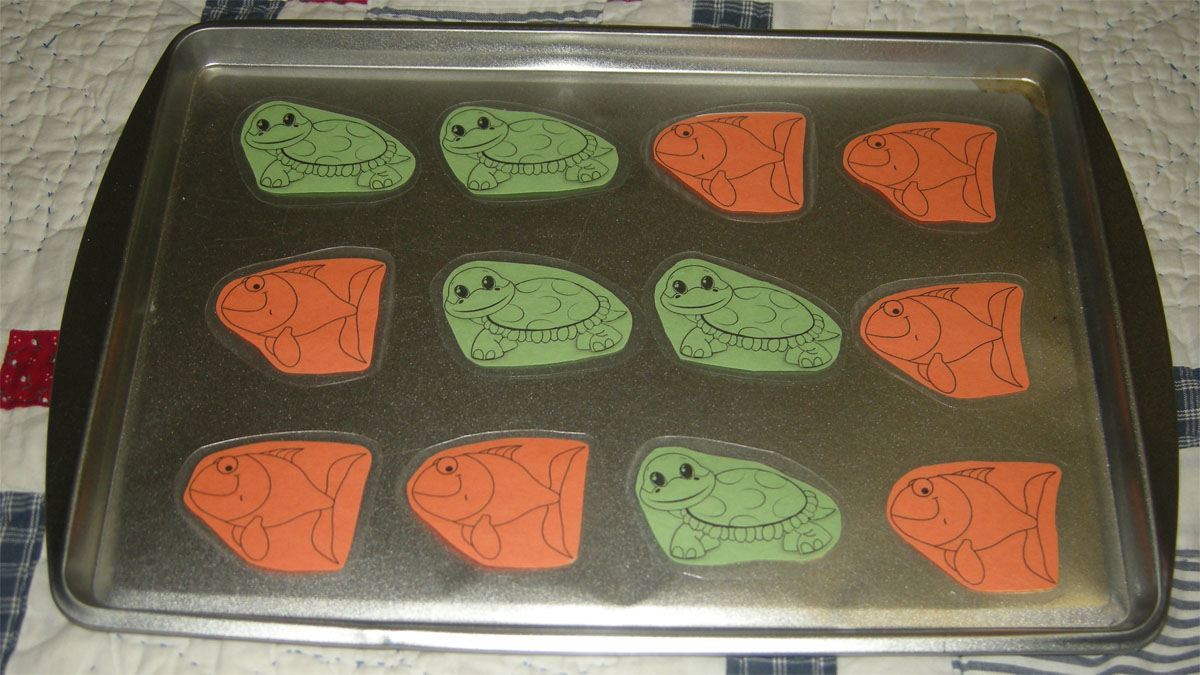 My final suggestion for using the printables is to use the printouts to teach the basic rhythms of quarter-notes and eighth notes.  This is a basic Orff concept where you substitute words for rhythm notes.  If there is one syllable, it represents a quarter note.  If there are two syllables, it represents two eighth notes.  Three syllables, a triplet, four syllables, four sixteenth notes.  While the concept can also be adapted for half and whole notes, it is most ideal for faster rhythms.  Unfortunately "fish", "duck" and "frog" are all one syllable and "turtle" is the only two-syllable printout I give you pre-made, but the turtle is pretty cute and he doesn't mind the spotlight. 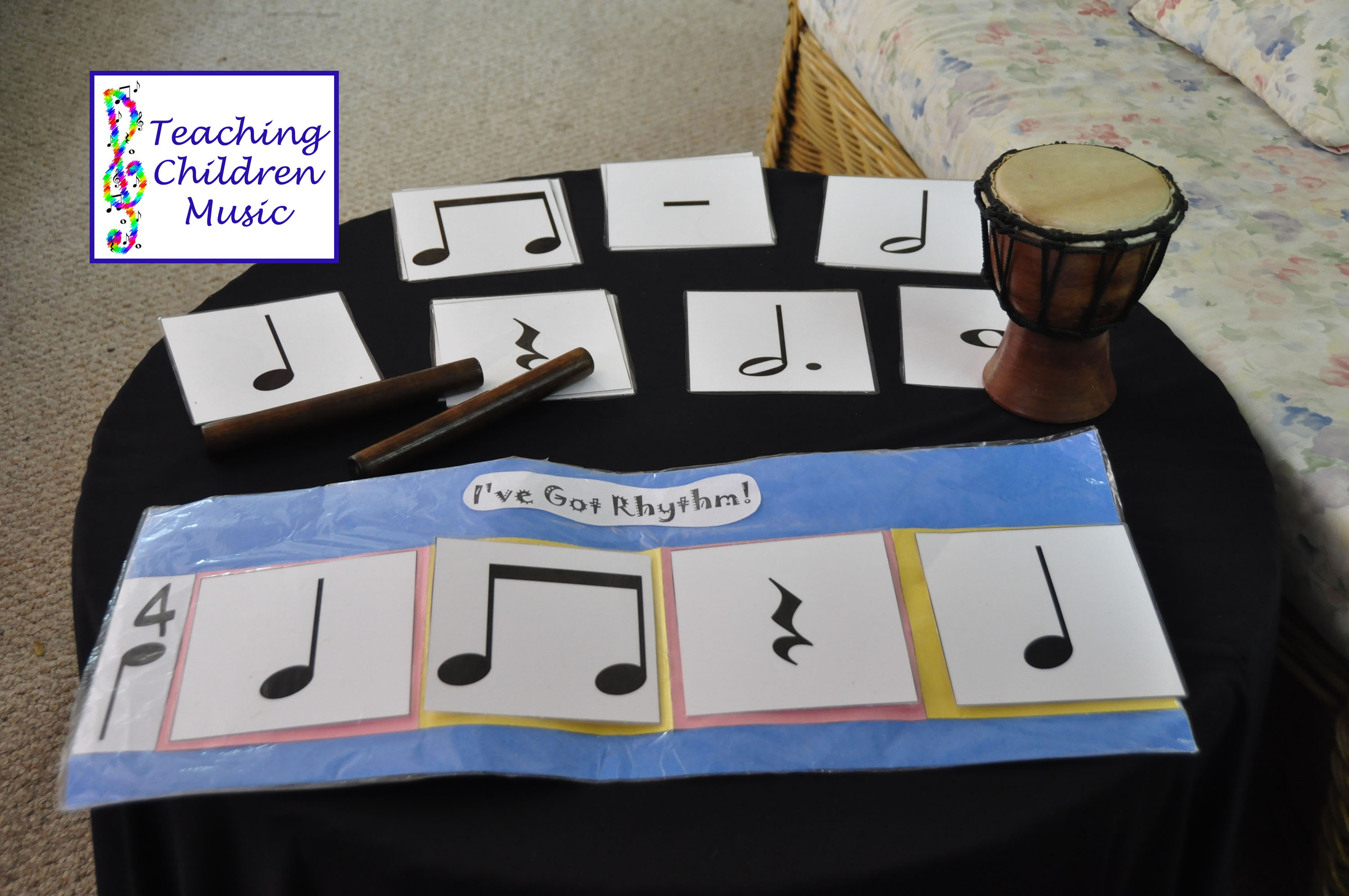 Ask the kids to make rows with four pictures each.  The rows will represent a 4/4 measure.  The picture above is one example of how the manipulatives might be arranged.  First say the names of the items rhythmically.  "Turtle, turtle, fish, fish..." and so on, giving one beat per picture.  Later you can go through the exercise of writing down the rhythm or recreating it with rhythm flashcards. We have pre-made rhythm card printables available in our store (see "Beginning Rhythm" or "The Solfege Train"), or you can make your own on something like post-it notes or index cards.

Introducing rhythm with fun pictures really helps set the stage for learning the notation.  It's easier for beginners to say the names of items than it is to count to four with all of the "ands" added to the mix.  For example, the measure pictured above could be said "One, two-and, sh!, four.  It's easier to say it with rhythm solfege, "Ta, ti-ti, sh! Ta!", and even funner to say it "Fish, Turtle, sh! Fish."  You can create your own rhythms with just about anything.  Going on a picnic?  Make a whole rhythmic list!  "Sandwich, drink, watermelon, plate."  Into Princesses?  "Snow White, Cinderella, Elsa, Anna, Belle!"  Star Wars fans?  "Han Solo, Chewy, Luke".  These printables are simply one tool you can use to practice and introduce this concept.  Go out there and have fun!